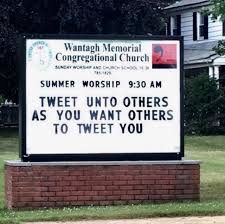 I am a fan of billboards, succinct declarations of what makes known the sense of an institution’s mission. Whether they come from Churches, Synagogues or Mosques, they constitute a creative motto for what floats their boat ideologically. Thus, the above billboard which sums up both their concern for the hazards of excessive electronic communication and their attachment to the Golden rule found in Leviticus’s Holiness code and in other sources including Buddhism. There is a quip from a scene in the marvelous Jewish Canadian film “Lies my father told me!” The ragman emerging from his noisy and gossipy Old Montreal neighborhood offers a query to God: “Dear Lord, when you said in the Bible ‘Love your neighbor as yourself,” did you know about Mrs. Lefkowitz?’” Easier said than done are following the prescriptions of faith. Many of us will emphasize the faults of others while minimizing our own missteps. At times it is psychologically rewarding to put someone else down to raise up our own egos which are in need of bolstering. In a more global view, we need look no further than to consider the current political discourse in Washington to see how civility has taken a downturn.

I have a rabbinical colleague who had the good fortune to work as an intern for a Senator from Alaska. The Senator artfully said to him one day; “When one of us wishes to take issue with or demean the views of a fellow senator we refer to him as ‘My distinguished colleague’ from such and such state!” But when we really wish to put him down, we say “My MOST distinguished colleague from such and such state!’” All romanticizing aside, the days of “Have you no shame?” have long passed. To use the current parlance this is the new normal. Can we unring the sour notes from current bells being rung in the future? Has its contagion spread too far and gone too deep into our psyche? Does the internet with Facebook provide ugly and lasting opportunities that encourage everything from cyberbullying to rumor mongering about age, looks and more? I hope not.

As part of our Pilgrimage of Peoples interfaith and multiracial tour to three museums: Holocaust, Indian, and African – American, we included a visit with Congressman Gowdy and Senators Scott and Graham. They were as cordial as they were amiable and receptive. Most touching was Senator Scott’s and Congressman Gowdy’s review of their book Unity. It was wonderful to have a half dozen of our young people outfitted in Boy Scout attire to witness such warmth and sharing by two leaders of our nation. Nice to see the Golden Rule demonstrated in these difficult days.

Wishing one and all a wonderful summer in which you tweet others as you would want to be tweeted.