Please join us tomorrow evening, Friday, January 27 at 6:00 for a very lovely evening with happy hour and hors d’oeuvres, dinner, service, and beautiful music by the Gelfond Players. RSVP to the temple. We hope you will join us!

In Memory of Helen Bimbi

ourtemple29302 / In Memoriam, News and Announcements, Our Congregation /

We are saddened to note the passing of Helen Bimbi, the sister of our member, Sandor Koser. Helen was, among other things, a Holocaust survivor who has been living in Israel and will be buried there. We wish Sandor and his entire family our sincere condolences.

Reminders for the end of January, 2017

ourtemple29302 / In Memoriam, News and Announcements, Our Congregation /

We are sad to note the passing of longtime member Stanley Nabow. Our condolences go out to the entire family. The funeral will be held this Wednesday morning at 11 o’clock. More details will follow. Currently we are anticipating two mourner’s minyans in the evening at 7 o’clock Wednesday and Thursday at the home of Sandy and Robert Nabow with a concluding Minyan at services on Friday. I encourage one and all to please convey your condolences to the family.

It’s a new year, and the temple directory is in need of an update. Several of you have given us new addresses and/or phone numbers as well as email addresses, and we will be updating your directory listings in the upcoming weeks. If anyone else has any changes that need to be made to the directory, PLEASE let us know as soon as possible. We list addresses, phone numbers, email addresses, birthdays, and anniversaries. If you are okay with the Rabbi and Jan having your cells numbers, but only want your land line number listed in the directory, just let us know. We can list whatever you’d like in the directory copy that goes out to congregants while keeping other information private in the copy that we keep here at the office for the Rabbi and Jan.

Also, your phone numbers are added to our calling post list so that you can receive via phone call important and last minute messages and information so please make sure we have your correct number(s).

Please let Jan know of any changes that need to be made before January 20th. Thank you!

ourtemple29302 / From Our Rabbi, News and Announcements, Worship /

Unless there is a change in the weather, we will meet tonight for services at 5:30 pm with a Kabbalat Shabbat with Wine, Cheese, and more. There will not be services Saturday morning. Religious school will be held Sunday, but we will call if that changes. Thank you! 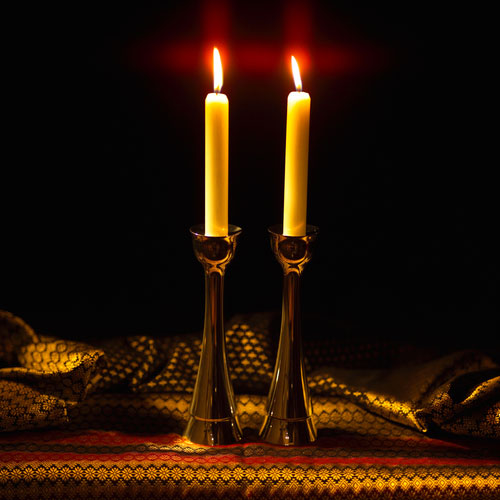 ourtemple29302 / Education, From Our Rabbi, Hadassah, News and Announcements, Our Congregation, Sisterhood, Worship / 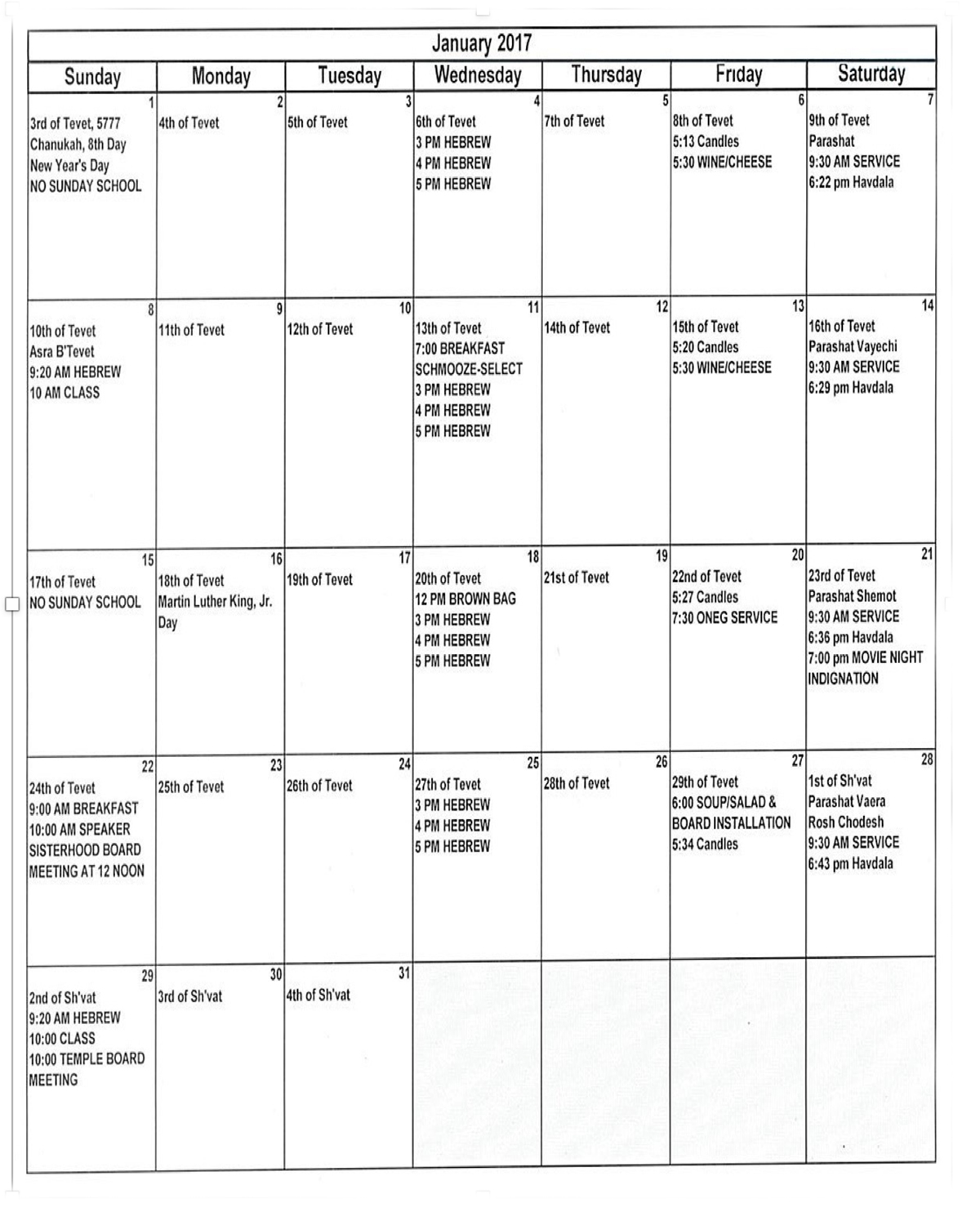 More than a coincidence of calendar couples the anniversary of the births of Rev. Martin Luther King Jr., January 15 and Rabbi Abraham Joshua Heschel, January 11. Two men from different geographies, color, creed, theological background were joined in a spiritual kinship whose legacy address our own times.

Heschel, a Polish immigrant, scion of a long line of Chasidic rabbis, Professor of Jewish Ethics and Mysticism at the Jewish Theological Seminary of America and King, an American descendant of slaves, a compassionate protector of the oppressed, charismatic orator, writer and theologian, marched side-by- side from Selma to Montgomery to protest the pernicious racism that poisoned America and humiliated its African-American citizens. A host of white citizens, filled with venomous hate, surrounded the marchers, jeered and spat upon them. But as Heschel declared later: “When I marched in Selma, my feet were praying.” It is important not only to protest against evil but to be seen protesting. Faith in the goodness and oneness of God is powerfully expressed through the language of feet, hands, and spine.

Heschel and King, these two contemporary prophets remind us to eschew the invidious “one downsmanship” that compares one people’s sufferings against another. Comparative victimizing is a divisive exercise that diminishes the anguish of our pain and replaces empathy with insensitivity. King and Heschel were united in the kinship of suffering and the shared vision of great dreams. Strengthened by the tradition of both biblical testaments, they defied the killers of the dreams quotations out of their bodies.

Describing Heschel as “one of the great men of our age, a truly great prophet”, Martin Luther King declared: “He has been with us in many struggles. I remember marching from Selma to Montgomery, how he stood at my side…I remember very well when we were in Chicago for the Conference on Religion and Race…to a great extent his speech inspired clergymen of all faiths to do something they had not done before.”

At that conference Heschel reminded the assembly that the first Conference on Religion and Race took place in Egypt where the main participants were Pharaoh and Moses. Moses’ words were: “Thus saith the Lord God of Israel, let My people go” and the Pharaoh retorted “Who is the Lord that I should heed this voice and let Israel go.” That summit meeting in Egypt has not come to an end. Pharaoh is still not ready to capitulate. The Exodus began, but we are still stranded in the desert.

It was easier for the Israelites to cross the Red Sea than for men and women of different color to enter our institutions, our colleges, our universities,”How can we love our neighbor”, Heschel asks rhetorically when we flee from him and leave him abandoned, congested in the neglected ghettos of the inner city?

After the assassination of King, Heschel said of him “Martin Luther King is a sign that God has not forsaken the United States of America. God has sent him to us…his mission is sacred…I call upon every Jew to hearken to his voice, to share his vision, to follow in his way.
The whole future of America will depend upon the influence of Dr. King.”

King and Heschel speak to our community in the diction of the ancient prophets. They dare remind us that while “some are guilty, all are responsible.” That moral responsibility transcends class, creed and race. Heschel and King taught us that the opposite of good is not evil but in- difference and that silence in the presence of evil amounts to consent. They charged us to transcend the cleavages that distract us from the solidarity of our goal, and to publicly stand together against the twin evils of racism and anti-Semitism.

The calendrical coincidence of their birth anniversaries calls upon us to resurrect the moral passion and wisdom that in- fused their lives. Our celebration of their birthdays offers testimony to the immortality of their influence. Their creeds, dogmas, pigmentation, like ours, are different. But our tears are the same.

Soup & Salad and Board Installation

Join us January 27 at 6:00 pm for soup & salad as well as an abbreviated service with the installation of Temple Board members.
There is no charge, but please RSVP for soup & salad.

ourtemple29302 / Education, From Our Rabbi, News and Announcements /